While as a nation we are trying to encourage more people to take their bikes to work, there have always been serious safety implications for vulnerable cyclists. There have been several recent incidents in the UK regarding the safety of cyclists when using routes that are popular with large vehicles like HGVs.

In a bid to combat the number of accidents involving cyclists and lorries, safety mirrors can be installed at traffic signals in order that drivers of large vehicles, like buses and HGVS, can have better visibility of cyclists when they are approaching junctions. HGVS are involved in more cycling fatalities than any other type of vehicle, despite the fact they make up only about 5 percent of the traffic. A woman was recently hospitalised in London after becoming trapped between a construction lorry and some metal railings. Sadly, there are also many fatalities every year for cyclists on the roads. Of the 16 people killed on bicycles in the UK in 2011, nine were killed by HGVs.

Transport for London has undertaken a recent trial of roadside safety mirrors at key junctions, primarily on the Barclays Cycle Superhighway routes. Cyclist safety mirrors enable HGV drivers to have a much better view around their vehicles. They also alert drivers to the possibility that there could be cyclists around and encourage them to check their own mirrors, as well as indicating to cyclists that they should not be on the left hand side of these vehicles. Passing vehicles on the inside at junctions is extremely dangerous behaviour from cyclists as large vehicle drivers cannot see them there as they often have blind spots in this area. This has been highlighted to cyclists in a recent safety campaign to try and prevent this behaviour.

Of the drivers surveyed, almost half recalled seeing the roadside safety mirrors and over a quarter of drivers used them. A third of cyclists and car drivers also stated that they remembered seeing the mirrors. No respondents had any issues with the mirrors, and even when prompted about the possibility of glare, only three reported issues which were considered to be slight.

The London Mayor is contemplating the idea of a “safer lorry charge”, which would dissuade vehicles without certain safety equipment like mirrors and side guards from using the roads. This would mean that vehicles who fail to install vital cycle safety equipment would be subject to a levy. Another measure would be to follow the example of other European cities like Dublin and Paris who restrict the times when HGVs can use the roads, preventing them from using the roads at peak times.  It may take some time for this sort of legislation to be in place in the UK. The use of safety mirrors is an easy and inexpensive first step towards making the roads safer for cyclists.

Will Trixi Mirrors Make Everyone Safer on the Road?

Trixi mirrors are often seen increasing visibility at intersections in big cities. If their use grows, will it make the roads a safer place for everyone?

Have you ever had a close call on the road when someone or something just seemed to appear out of nowhere? This may be because they were invisible to you until the last minutes. Typical rear view mirrors can see cars, pedestrians and cyclists that are behind your car and you can see anything next to you with your peripheral vision. However, there is a spot on most vehicles, when an object is to the side of your back bumper, where neither you nor your mirrors can see. This is called the blind spot and drivers should frequently check this by turning their heads and looking directly at it. However, trixi mirrors can help increase visibility to help drivers and pedestrians see the streets and pavements around them. Trixi mirrors can benefit many individuals who share the road, including:

A heavy goods vehicle, or HGV, is essentially a large lorry. They do not have the option of turning around to look out the rear window to check their blind spots because there is no rear window. Plus, they require extra space when turning to accommodate their long trailers. Typically, an HGV will have their own convex mirrors on each side of the cab in order to see their blind spots but trixi mirrors give them extra visibility into places they might not normally see.

Typical smaller vehicles have more visibility than a large lorry but they still have blind spots and most don’t come with built in convex blind spot mirrors. Going through a junction means checking a lot of different directions to make sure no cars or pedestrians will be in your way. Whether it is a full dome mirror or a smaller trixi mirror it will add a large view of the area so that drivers can be sure to check everything before a turn.

Pedestrians and bicyclists have the challenge of sharing the road with large and potentially dangerous vehicles so they can use whatever safety measures that are available. Trixi mirrors that are pointed at bike lanes or pavements are specifically designed for two functions. It allows cyclists to see the cars that are coming from behind them and it allows cars to see and cyclists that are also coming from the rear. This is especially important because when a car is making a turn, the driver is often focused on the cars on the road and they might not notice a cyclist that intends to go straight. A trixi mirror gives them an easy-access view to the road behind them so that they can make a safe turn.

Trixi mirrors are an essential traffic safety measures for drivers, cyclists and pedestrians. The more we can see what’s around us, the more accidents we are able to avoid.

Mentioned in this Article... 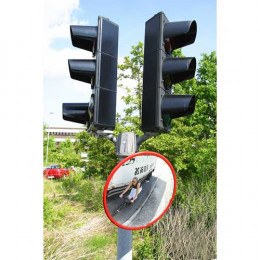